Contextual: Statically-checked Interpolated Strings for Everyone!

Interpolated strings, like the familiar `s""`, provide a convenient way to embed external DSLs in Scala source, allowing you to construct a new value at runtime from a string literal, with Scala expressions substituted within it.

But unless you are prepared to implement the interpolator using a macro, the compiler provides no checks on the correctness or well-formedness of the embedded DSL.

Contextual is a small open-source library which does the heavy lifting work to make it trivial to write string interpolators which run at compile time, without requiring any macro code. A string interpolator which parses and checks a DSL at compile-time -- with its own custom error-messages -- can be written using contextual in just a few lines of ordinary "userspace" code, calling upon parsers, regular expressions or any other means to check the interpolated string.

This opens up a smorgasbord of possibilities for adding more compile-time safety to Scala code, not least the ability to introduce your own literal-like types, ranging from checked email addresses or URLs to compile-time-parsed YAML, CSS or GraphQL. 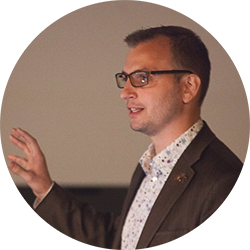 Jon (@propensive) has been having fun riding the bleeding edge of Scala for over a decade, and he's not done yet. While he's not travelling the world attending Scala conferences, or organizing his own (Scala World), Jon spends his time working on the open-source Rapture libraries. He is principal engineer at The Scala Center.